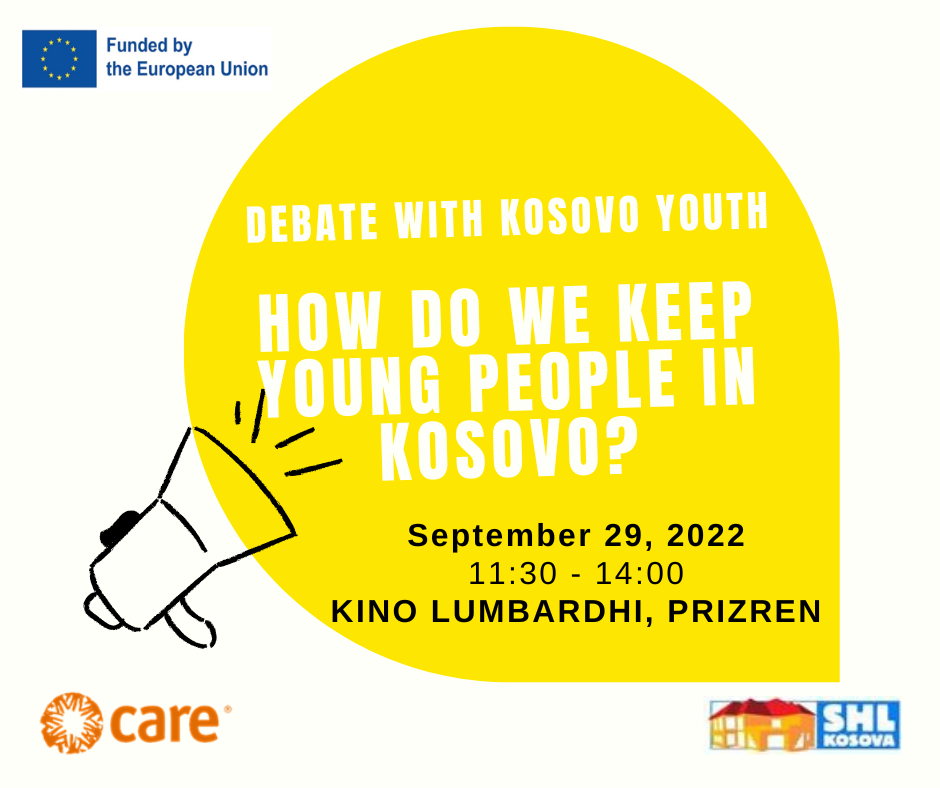 Topic: How do we keep young people in Kosovo?

Within the framework of the Kosovo Youth Participation Project – KYP implemented by CARE Deutschland e.V. Office in Kosovo with partner organization SHL-Kosova and in close co-operation with representatives of the Kosovo National Youth Congress will be organized a debate on the subject: How to keep young people in Kosovo?

Human capital is Kosovo’s most important source, where over half the population is under the age of 30. At the same time, more than half of young people are not employed at all, despite having a degree or completing their initial education. In addition, at least 1 in 3 young people openly express a desire to leave Kosovo and live in any other Western country. Trends in the movement of citizens in Western countries have received particular attention in recent years, seeing the great need for the workforce, especially in German-speaking countries.  Thus, a large number of health, technological professionals, or even other fields see their future outside Kosovo. This poses a real risk to Kosovo’s needs in all economic and social areas and potentially affects other social, political, and economic dynamics.

The position of young people in Kosovo is determined by the lack of practical opportunities for their social and economic participation. With 53% of the population under 25, Kosovo has the youngest population in Europe, presenting great demographic and economic pressure on Kosovo society, as every year a generation of young people completes schooling and begins to look for work. Kosovo youth aged 15-24 have an extremely high unemployment rate of 46.9%. Unemployment for young women (15–24) is even higher according to the same statistics, at 61%, indicating for marginalization and multiple exclusion. The KYP project aims to support various activities leading to higher youth employment in targeted areas of the project.

Through an open discussion, we will gather a wide range of key acts interfering with social dynamics that directly affect the well-being and involvement of young people in political, social, and economic life in Kosovo. Through discussion with different professional panelists from the local, central level, the sector of culture, youth, sport, and representatives of civil society working with young people, we will address the problem in question, focusing on the main causes of this phenomenon, as well as propose recommendations for improving the situation. In order to further discuss democratic topics among young people, the KYP project is co-operating with the Kosovo National Youth Congress so that together with youth as participants to create and address messages that are important to them.

This activity is being organized within the framework of the Kosovo Youth Participation project with the financial support of the European Union.