On September 29, as part of the activities of the Kosovo Youth Participation – KYP project, CARE Deutschland e.V. Office in Kosovo with the co-implementing partner SHL-Kosova within the National Youth Congress, 2022 organized a debate with the youth of Kosovo.

This year’s congress with the theme: “How to keep young people in Kosovo” was held at Kino Lumbardhi in Prizren and was attended by an audience of more than 160 youngsters and guests. This activity was carried out in close cooperation with the National Youth Congress of Kosovo, which was enriched by the presence of institutional representatives.

The youngsters, meanwhile active participants in the debate, had the opportunity to tell more about the reasons that are pushing them to leave Kosovo.

One of the participants during the open discussion said that: “Young people are not leaving Kosovo because of survival/existence, because here they find the same, but they are leaving for a life with better welfare. The blame should never lie with the youth, but our country lacks an inclusive economy that offers opportunities to everyone.”

The mayor of Prizren, Mr. Shaqir Totaj meanwhile, on behalf of a hosting city stated: “The topic of the debate is quite attractive and the same requires treatment by young people. It is very important to find out the causes of young people’s flight from the country and thus to be treated by the institutions.” 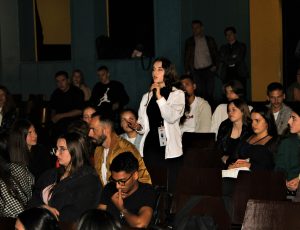 The purpose of the discussion was to give space to young people aged 15-25 to express their opinions on the reasons for young people leaving the country as well as find a potential solution. Among the many comments, another young woman said: “The responsibility to create a better country also falls on us, we must love our country and contribute to a bright future and we should not leave.”

Recommendations from the debate based on the comments/concerns addressed by participants will be addressed to the relevant institutions at the local and central level, thus advocating directly for the youngsters’ interests.

This activity is organized within the framework of the Kosovo Youth Participation – KYP project with the financial support of the European Union office in Kosovo.